Shipping
Go To Step #2
We Respect Your Privacy & Information
Edit Shipping Details
Your order has been declined. Please double check your Credit Card Details or contact support for information.

WAIT! YOUR ORDER IS NOT YET COMPLETE!
Almost Complete...
"After giving 1000s of prophetic words, I found that people are truly hungry to hear from God regarding their specific situation. If that’s you, I can help."
Spend 45-60 Minutes With Prophet Rob For a Private, One-On-One Prophetic Counseling Session To See What God Is Saying About Your Situation!
If you need clarity, direction or peace, this is for you!

Discover What God is saying about your life! If you are wondering If God is still speaking through prophets, look no further. Receive a word from God through prophet rob.

"Prophet Rob Sanchez is a dear friend of mine who has given me an incalculable number of prophetic words that have all been very good and encouraging to my life. Jeremiah 1:5 says, "Before I formed you in the womb I knew you... I ordained you a prophet to the nations. " I believe this verse describes Rob; he is a prophetic voice who is making an impact."

-Dr. Keith Ellis, Th.D. Author of One Minute With God: Sixty Supernatural Seconds that will Change Your Life

This Special Offer Ends in...

Yes Prophet Rob, I Would Like To Meet With You One-On-One For A Prophetic Counseling Session!

YES, HAVE PROPHET ROB SPEAK A PROPHETIC WORD OVER MY LIFEADD THIS TO MY ORDER - ONLY $350

How to best utilize your 1-on-1 prophetic counseling session...
Hear how Prophet Rob's Prophetic counseling has helped many people...
"My wife and I are very honored and blessed to have been ministered too and encouraged by the prophetic gift that Prophet Rob operates in. A few years ago, my wife and I were going through financial hardship and we only had one vehicle to get around. Prophet Rob ministers in our church and prophetically speaks that we were to have a new car with no down payment, we would drive it right off the lot! We were so excited for it and then not long after that our car breaks down. In that moment we were so discouraged, but we remembered the prophetic word. Well, long story short, what he prophesied is exactly what happened!! We drove a brand new car right off the lot with no down payment. It was literally a miracle. Something only God can do, because we had no money for a new car at the time. Hallelujah ! Thank you so much for your ministry, we love you Prophet Rob!"    -Gustavo and Roseanna Sanchez
Prophetic Counseling Session (1 on 1)
This LIVE Session Will Be Custom To You. Come With A Concern Or Question About Your Life OR Let The Prophet Freestyle What He Hears The Lord Is Saying About You!
What You Can Expect From A Live Prophetic Consultation:
#1: Prophet Rob Will Hear Your Concern And Tell You What He Hears The Lord Saying Over Your Situation. This could be a dream interpretation, relationship concern, career move etc.

If you feel stuck, confused, overwhelmed or uncertain, this session will help bring clarity to your life.

This Special Offer Ends in...

"Prophet Rob, can you give me a word? What is The Lord doing or saying in my life in this season?"

If you feel stuck, confused, overwhelmed or uncertain, this word will help bring clarity to your life.

2 Ways To Get A Word From Prophet Rob Sanchez...

How Does This Work?

How Does This Work?

When purchase a Voice Memo Prophetic Word, I will send you an email that will ask you for the information needed to fulfill your order.
All you have to do is send me YOUR NAME or QUESTION or THE CONCERN that you have I will hear from Heaven and deliver a word via voice memo to you!
YES! Get My Prophetic Voice Memo Voice Memo From Prophet Rob 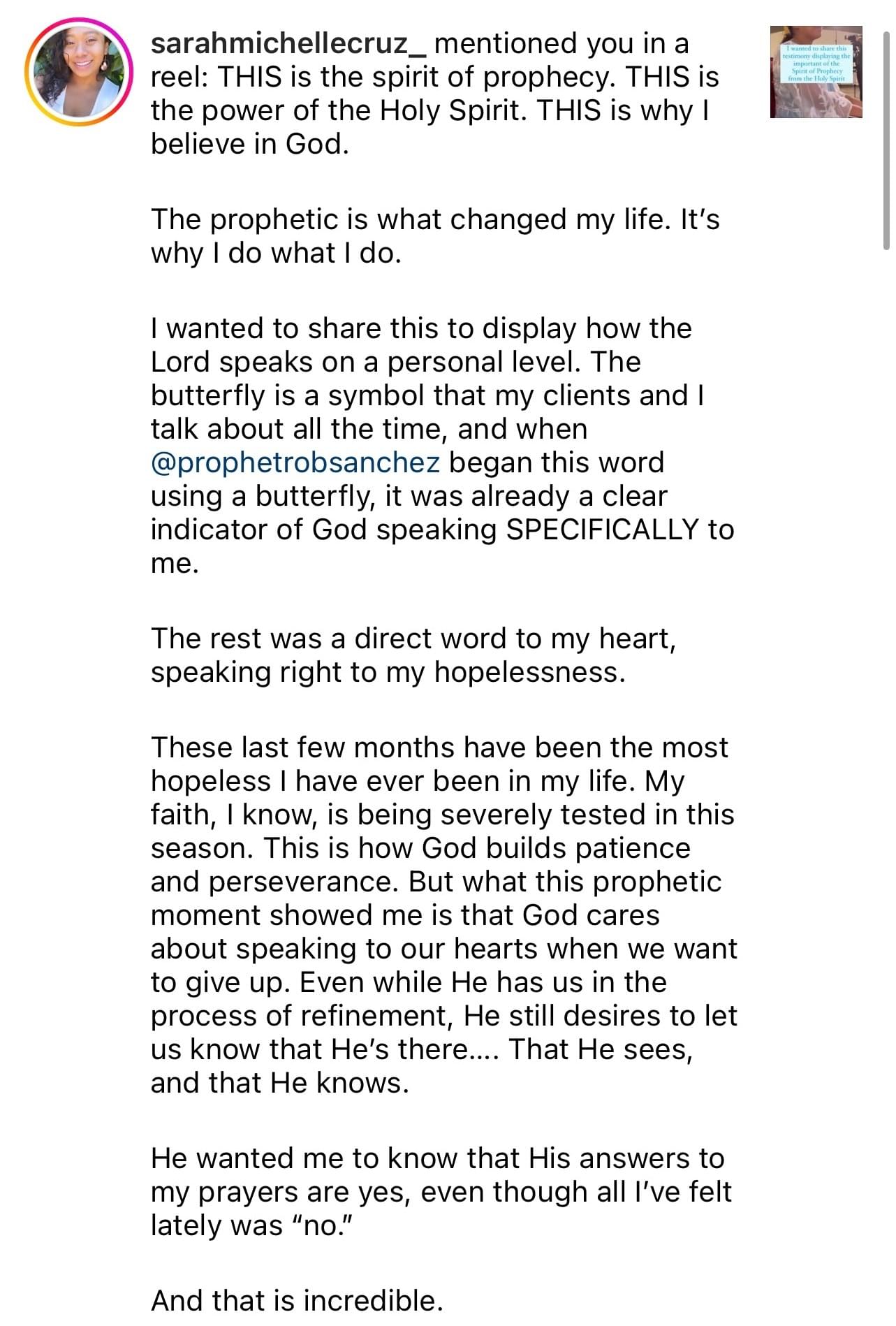 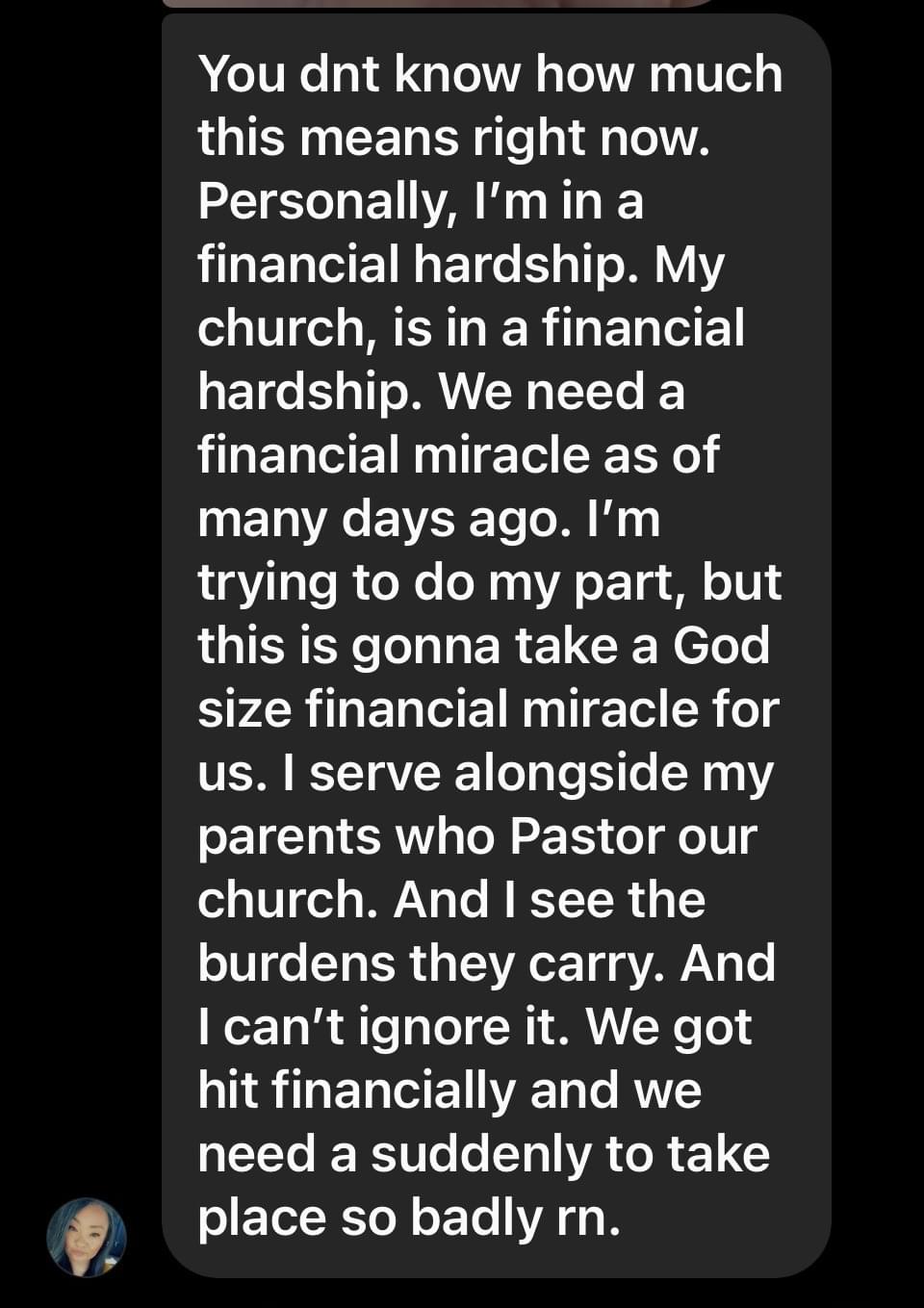 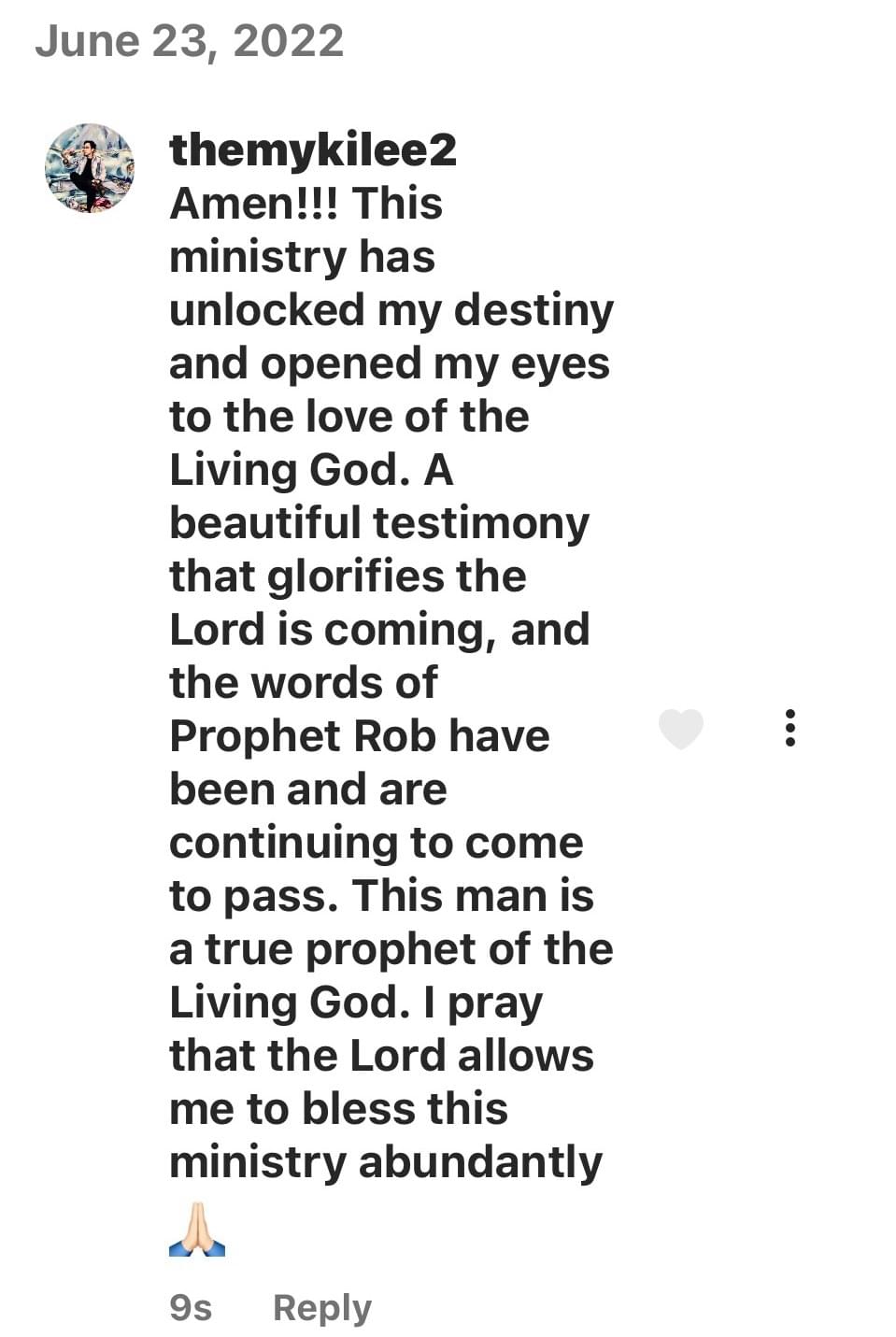 One of my most treasured moments is ministering alongside Prophet Rob in Kansas City. During a time of ministry, he invited me to prophesy. I called up a young wife who was having trouble giving birth. I prophesied that her and her husband would have a child. And about a year later they had their first son. Prophet Rob’s ministry isn’t about him, but about God’s faithfulness to His word. And because of that, people don’t just receive accurate prophetic words, they receive the power of Jesus to be the manifestation of His words.
- Josiah Centeno
I saw Prophet Rob Sanchez give my dad a word in a service he was speaking at and I said to myself, “Next time, I want him to give me a word”. In May 2011, we attended another service Prophet Rob was speaking at… as he began to flow in the prophetic, he pointed at me and said “ In three weeks, your life is going to change. You’re called to be a leader of leaders….”. I was in shock because I was a very quiet and shy young girl but I knew what he said about my life changing in three weeks was going to happen so I held onto it.

3 weeks later, on June 22nd, 2011. I ended up giving my life to Jesus and He radically set me free. I knew that prophetic word was the wheel set in motion for me to find out who God really was.
5 years later, another level of that prophetic word came to pass as I attended a world renowned ministry school in Redding, California. I got to see the 2nd half of that prophetic word come to pass as I began to lead rooms that has had leaders from all around the world gather for more of Jesus.
I’m so thankful for how the Lord used Prophet Rob to deliver a word that would change the course of my life and discover God’s goodness.
-Savanna Ortiz
My name is Rodshae’ Silas and I would like to start by saying that I first met Prophet Rob about 12 years ago when he was ministering at Praise Chapel in Lee’s Summit, Missouri. I’m sure he doesn’t remember. Haha. However, Prophet Rob prophesied over my life back then and here we are many years later and he’s still being used by the LORD! It’s amazing. LIVG Ministries has been my family since October 2021. I grew up in church, but over the years I have lived a lifestyle pleasing to myself and not the LORD. In doing so I got pregnant out of wedlock. I now have an amazing, beautiful son, Maycer. I suffered from post-partum depression. On top of that I received devastating news in July of 2021. The news broke my heart so badly. I didn’t eat or drink anything for days. I hid my pain from my son, family, and close friends. I felt like I couldn’t talk to anyone so I did the one thing that felt right… I cried out to God. I felt hopeless, helpless, and broken beyond repair. Every single day I cried out to God! I also started watching sermons on YouTube for encouragement. I came across one of Prophet Rob’s sermons from the series ‘What The Heavens Are Saying’ the title of the sermon was ‘Breakthrough’. I knew that God led me there because the scriptures I was meditating on at the time were all mentioned in the sermon. I began to tune into What The Heavens Are Saying every Thursday night without fail. LIVG Ministries is such a big part of my life now. God has given me so many blessed Words through Prophet Rob. The LORD used LIVG Ministries to pull me out of the dark hole I had sunken into. I am now hopeFUL and although I still hurt I am no longer broken. The LORD has made me whole. I have always knew God, but I never KNEW God. I am now so deeply in Love with my LORD and Savior! I can say this with 110% confidence… Prophet Rob is a true man of God! His life is dedicated to doing the LORDs will. That is one of the main reasons why I gladly sow into this ministry. I purchased a copy of Prophet Rob’s book ‘Discovering & Releasing Your Prophetic Voice’ and let me tell you that this book did not disappoint. The stories in this book gave me a hope to hold on to. My favorite story is Chapter 9 ‘The Future Revealed - Prophesying A Proposal’ about PJ and Jen. This story is beyond touching. I really wish the book was longer. Haha. I feel like I’m rambling on, but I can’t find the words to say just how much God used LIVG to save me from a dark place! From the daily Word of the LORD that Prophet Rob post to his social media accounts to the weekly sermon… God led me here for a reason. I’m so grateful that the LORD loves me enough to chase my heart down and lead me to LIVG. I live in Georgia, but I made a trip to California to visit the LIVG studio because I was hungry for the Word. I just remember reading about people coming from all over to hear Jesus speak. I am not comparing Prophet Rob to Jesus, but I wanted God to see my desperation. Thank you, Prophet Rob for saying “yes” to The Most High because your yes may have very well saved my life. This is only the beginning of my testimony. I’m pretty sure that by the end of this year I will see God’s promises manifest in my life. So get ready because God is not done with me. There’s lots more to come!  - Rodshae’ Silas
YES! Get My Session With Prophet Rob